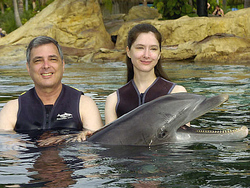 It all began in 1999, when I received Rodney as a "welcome home" gift from Sondra. At the time, I was stationed in Belgium, working for US civil service as a computer technician. I had just returned from a temporary trip to Germany for a training course. Sondra is my daughter. She had accompanied me to Belgium for the opportunity to attend college abroad.

Rodney isn't a Beanie Baby, he's an Attic Treasure. Actually, Rodney isn't even "Rodney." His natural father, H. Ty Warner, originally named him Radcliff. But beanies don't like Ty-given names because they have to share their names with thousands of brothers or sisters who look exactly like them.

Beanies are much happier if you give them a new name when they join your family. A beanie with a unique name is appreciative, healthier and more alert. Most well-adjusted beanies are so happy, healthy and stress-free they outlive their human owners.

We assigned Rodney the job of guarding our Honda. That gave him a sense of purpose. It soon became apparent he needed company during the long hours of inactivity in the car. A few weeks later Gizmo, a Beanie Baby, approached us in a store and volunteered to fill the companion job. Gizmo was renamed Skittles and joined Rodney in the car. They both served faithfully as car guards until 2009, when they agreed to accept inside (the house) jobs as trainers for future generations of beanie car guards.

Rodney and Skittles also proved conclusively that an Attic Treasure and a Beanie Baby can not only work together but also become close friends.

Our posse was soon joined by The Geezers who agreed to watch over our luggage and other belongings whenever we travelled. The family was growing. 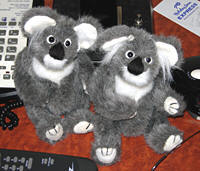 In December 2002, I received Cheeks as a Christmas present from Wanda Whitley, a secretary (oops; administrative assistant) at my workplace. Wanda had seen Rodney and Skittles in my car and assumed I was a collector. She told me she had purchased Cheeks in the USO office across the hallway from my office. USO office? Across the hall? I had never even noticed. Considering the excellent job Rodney and Skittles were doing in the car, I assigned Cheeks as my office computer guard. Cheeks insisted on keeping his original Ty name. Just stubborn, I suppose. 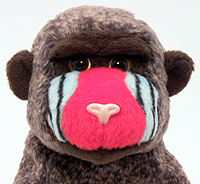 Cheeks did such a remarkable job protecting my computer against hackers, viruses and crashes that I decided to hire a printer guard. What better place to go hunting than the USO office across the hall. That was my next step (well, 8 or 9 steps) into hopeless and permanent addiction. The USO was full of Beanie Babies and Attic Treasures searching for permanent homes.

The USO club office manager helped me select Spinner for the printer-guard job. Four dollars later and renamed as Legs, he joined the office crew. More office guards followed. Soon there were well over a hundred assorted Beanie Babies and Attic Treasures watching over the office. Most of them had traveled only a few feet from the USO office across the hall to join me.

Friends and co-workers started giving us Beanie Babies and Attic Treasures as gifts. Near the end of 2003, I looked around the office at 350 or more stuffed Ty companions and suddenly realized I was hooked. The USO hostess was my pusher. I couldn't stop. The only good option seemed to be a new start in a different location. In June, 2004, I returned to the US with Sondra. We travelled by plane while our extended family went by ship (all except the Geezers who were under contract to travel with us).

One would think a change in location with the resultant isolation from the USO would cure my addiction. But it didn't. I found myself sharing a rented house with nearly 400 beanies who, on a daily basis, reminded me in no uncertain terms that they expected me to adopt the rest of their extended families. Weakened by months and months of daily pressure, the constantly staring eyes and discordant dreams of unhappy Beanie Babies and Attic Treasures, I slipped over the edge and agreed to their demands.

Sondra didn't even try to stop me. It turns out addiction is contageous. It was time to discover just how many family members and relatives our beanies actually had. We didn't know at the time that we were going to need a much bigger house.