What are Beanie Babies Really Worth? 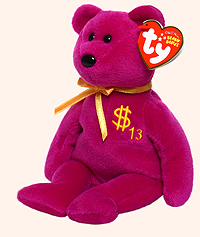 A Ty collectible is worth an average of the price buyers have actually paid for it on secondary markets like eBay over the past 30 - 120 days. That means the actual value of every Beanie can and does change practically every week. It is difficult to pin down a value for Beanies that haven't appeared in a recorded buy-sell transaction for several months.

Supply and demand determines Beanie Baby (and all other Ty collectibles) values. The overall direction of the value curve for Ty collectibles in general has been "down" since 1999. That trend appears likely to continue.

Beanies that sold for hundreds or even thousands of dollars on the secondary market between 1994 and 1998 barely fetch ten cents on those dollars in today's secondary markets.

Rarity and physical condition of a Beanie and its tags are the most important factors affecting values. A Beanie without its swing and/or tush tag is essentially worthless unless the Beanie is extremely rare. Collectors, resellers and investors generally agree that a Beanie loses beteen 50% - 95% or more of its inherent value when the swing tag is missing, damaged or defaced.

My observations over the past several years indicate Beanies without swing tags are almost impossible to sell unless they have 1st or 2nd generation tush tags. Even then, the going price for a Beanie without a swing tag is normally only 5% - 15% the value of a similar Beanie with a mint swing tag. The condition of the swing tag is just as important as the condition of the Beanie. A badly creased, bent, faded, dented or defaced swing tag has almost the same negative effect on a Beanie's value as no swing tag at all. Value also decreases if the swing tag has price stickers or sticker residue on it.

Until 2008, printed value guides were published every few years with suggested values for Ty collectibles. Those guides are too outdated now to be useful or credible. The values in the printed guides (applicable to mint Beanies with mint swing & tush tags) were blatantly inaccurate and for the most part, highly inflated. It takes so long to have a hard-copy value guide researched, written, proofed, printed and shipped from the printer, that the values shown in any book are obsolete long before the book ever reaches a collector's hands.

A good example is the Beanie Baby named Softbank Hawks, released exclusively in Japan, in July 2007. The 2007 Ty Beanies Tracker showed a value of $2,800 for this beanie. The next year (2008) Warman's Bean Plush Field Guide hit the streets showing Softbank Hawks still valued at $2,800. Near the end of that year, most sellers couldn't find a buyer for this bear even with an asking price as low as $200. Considering the actual eBay selling prices under $300 for several confirmed sales of authenticated Softbank Hawks Beanie Babies in 2008, the 2008 book value of $2,800 shown in the Warman's Guide seems ludicrous, if not blatantly dishonest.

I asked a few Beanie Baby collecting experts why Softbank Hawks had such a high "book" value when it was frequently selling for less than 15% of that value at eBay. The typical reseller explained that some collectors had actually paid $2,800 for Softbank Hawks when it first came out. Sorry, wrong answer. It doesn't matter what someone paid for a Beanie when it first appeared on the secondary market. What matters is the average price that Beanie has sold for repeatedly over the past one to four months.

It also appears odd that both of the value guides mentioned above placed a minimum value of $7 on every normal-sized Beanie Baby. The reality of eBay trashes that presumption. It makes no sense for a book to show a minimum value of $7 for common, retired Beanie Babies that are bought and sold "like new" on eBay every day for a dollar or less. The majority of the Beanies valued at $7 never even cost that much at retail when they were new.

Our current method for estimating Beanie values is to check "sold listings" at eBay to see what price items have sold for within the last 30 - 120 days. The actual prices currently being paid for collectible items are a better indicator of actual value than any other reference I have seen.

eBay makes it easy to check recent buyer purchases. Go to the "search" field on the eBay homepage and type in a few key words for the Ty collectible you need to check. Always use the word "Ty" (without the quotation marks), the product line, and the name of the item, i.e. "Ty Beanie Flash." When the search results pop up, scroll down the menu on the left side of the page and click the box for "sold listings." The results you get show prices buyers have actually paid for that item during the past 30 - 60 days. The average of the prices being paid is the approximate value of that particular item.

When there haven't been any recent sales at eBay of a particular item, we generally appraise a value of roughly 10% - 20% of the amount listed for that item in the most recently published hard-copy value guide (currently the 2008 Warman's Bean Plush Field Guide, 2nd Edition). Patience pays off. We have acquired more than 50% of our collection for less than 20% of the values listed in the 2008 Warmans.

Conversely, if an allegedly rare and authenticated Ty collectible Beanie Baby gets listed at eBay for a fixed "buy it now" price and there are no takers, the item is obviously worth less than the seller is asking. 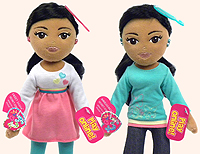 In some cases a new Ty product skyrockets in price with no selling history to use for value estimations. This happened in January, 2009, when Ty announced and shipped two new Ty Girlz, Sweet Sasha & Marvelous Malia. Ty's suggested retail price was $9.99 each.

Coincidentally, they had the same names as President Obama's daughters. Surely that wasn't intentional (wink, wink). On January 23, 2009, Michelle Obama publicly objected to the commercial exploitation of her daughters' names. On February 2, 2009, Ty announced that the Malia & Sasha names had been discontinued. The two Girlz dolls were renamed Sweet Sydney & Marvelous Mariah. Same dolls, different names. The frenzy to buy dolls with the original Sasha & Malia swing and tush tags was on. I don't know how many of the original pairs actually shipped with the original swing and tush tags, but the number 300 was suggested by several active and experienced Ty plush resellers.

These are some of the prices the original pair of Sasha & Malia Girlz sold for on eBay after their names were retired. I don't have a record of all sales; I just sampled the transactions periodically:

If you really wanted the Sasha & Malia pair of Girlz for your collection, how much would you have paid for the pair in March 2009? How much would you pay today? Just something to think about because nobody can credibly predict what they will be worth tomorrow or any number of years in the future. On February 18, 2012, a seller on eBay declined to sell a pair of authenticated original Sasha & Malia Girlz because the highest bid submitted was only $314. As I said; values are declining. In late May 2012, the Malia and Sasha pair was listed on eBay for a "Buy it now" price of $500. There were no takers. In September 2012, there were no interested buyers for a set of the Sasha & Malia Girlz offered for $600. In March and April 2013, two different sellers were unable to sell Malia & Sasha sets for $700 and $750. Then in August 2016, a pair sold for $150.

The moral of this story: don't trust value guides. They are great for checklists and reference but the value estimates are highly inflated and unrealistic. When a collectible is so new there is no way to establish a secondary market value (like the Malia and Sasha Girlz in 2009), be wary of high values being driven by short-term buying mania on eBay.